You are here: Home » Cocktails » The Dom 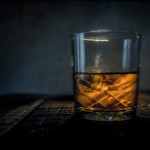 Black pepper vodka, kirschwasser and amaretto blend for a warm and inviting cocktail with just a touch of lemon. Created for my friend and invaluable technical wizard. May you drink deeply of life… and cocktails, of course.

This recipe was crafted specifically with black pepper vodka. As far as I know, there is only one commercial black pepper vodka on the market –General Beauregard Dixie (others are made with jalapenos, chili and such and will not taste the same). But take heart! It’s easy peasy to infuse peppercorns in vodka and have your own craft spirit in a day or two. The recipe is included below.

2 Responses to The Dom