You are here: Home » Articles » WAVE Vodka – a review 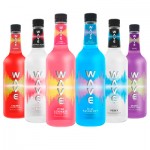 Someone at WAVE Vodka knows their physics. One look at the zippy packaging and juicy colors of their flavored spirits will produce an audible “Wow!”

The charming folk at the Sazerac Company, Inc., who produce and bottle WAVE, sent me a selection of their vodkas to try – Lemon Lime, Pink Lemonade and Baja (a tropical fruit mix). The vodkas are all sweetened and, for my taste, lend themselves best to mixed drinks. So I started mixing and came up with a number of simple but yummy and jazzy creations to reflect the company’s claim that “The WAVE brand embodies the spirit of having fun, socializing and sharing creative moments together.”

shock wave
noun
1. …….abrupt change of pressure and density moving as a wave front……… caused by an intense explosion or supersonic flow over a body.
2. a repercussion from a startling event or upheaval; series of aftereffects

Well, I’m not sure you’ll get quite the dictionary reaction described above, but a generous amount of fresh lime and a dash of 151 with Baja WAVE gave this potion a definite jolt and elevated it to the favorite amongst my taste testers.

This was a given as soon as I saw the WAVE bottles. It’s perfect party material that you can really amp up and your guests will love. The Wavebands are colored layers of vodka jelly and the Wavelets are nudes made in ice trays. Watch the video for more detail.

If you haven’t had sherbet shots before now, they’re always a big hit with guests and the flavored WAVEs are ideal for mixing. Just add a mini scoop of your favorite sherbet to a shot of your favorite WAVE vodka.

Ones of the world’s favorite drinks, the Mojito, made WAVE-style with Lemon Lime vodka. And for good measure, a variation on the theme with rosemary and ginger ale instead of mint and club soda. Either way, deliciously delightful.

WAVE also comes in Grape, Whipped Cream and Blue Raspberry and, as you can see, it’s easy to make WAVEs with frequency. And at a suggested retail price of $8.99, Sazerac is poised to ride the wave of the growing flavored vodka market.

PS. Apologies for all the “waveisms”, I just couldn’t help myself. I’m waving goodbye now.

One Response to WAVE Vodka – a review