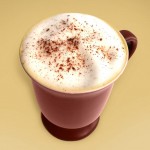 This Cinnamon Roll recipe is a Sandra Dee creation from several years ago. The aroma is heavenly and it tastes absolutely lush. There’s enough for six people so gather some friends together and enjoy.