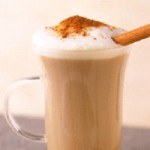 Note from MixnSip: For those of you who enjoy their coffee a little uh, stronger, we suggest a shot of cognac would not be a bad idea.