You are here: Home » Cocktail How-To » The Martini: Should it be Shaken or Stirred?

There’s a general theory amongst professional mixologists and earnest cocktailians that drinks made with clear spirits (that is: vodka, gin, rum, vermouth, etc.) should be stirred with ice to chill them.The idea being that the liquor will maintain its crystal appearance and be more appealing to the eye. Some experts also claim that the cocktail tastes better when made this way. Hmmm….

It seemed to us at Mix ‘N Sip that both taste and appearance are highly subjective, and why should we be lemmings migrating towards a stirred beverage simply because someone tells us we should? After all, James Bond was singular enough to insist on a shaken libation. So we decided to put the martini to the test.

Prepping two martinis – three parts gin to one part vermouth – and with glasses at the ready, we shook and stirred and strained. Then we looked and sipped and here’s what we found. 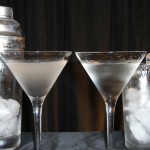 But wait! There’s more to this conundrum.

Even the British Medical Journal has got in on the debate and claims that the shaken ‘tini may be healthier because of its antioxidant properties. Meaning that the act of shaking introduces oxygen into the spirits. (Frankly, if you’re concerned enough to care about that you probably shouldn’t be drinking at all). Besides, give it a minute or two and the shaken cocktail settles and then you really can’t tell any difference between the two.

*The term “bruising” refers to the effect that shaking has on liquor. It both aerates it and tiny shards of ice tend to break off the cubes into the alcohol.

There’s more to see on the video.

Posted on September 14, 2011 by Mixnsip
Tagged martini, stirred or shaken, The martini
2 Comments

2 Responses to The Martini: Should it be Shaken or Stirred?