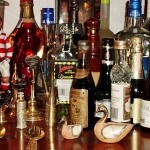 Liquor or liqueur. What is the difference?

The question seems simple enough and, in fact, there is a relatively simple answer…. sugar.

Both liquor and liqueur contain alcohol. Liquor is a distilled spirit made from a fermented mash of either grains, vegetables or fruits and is not sweet. Gin, vodka, tequila, rum and brandy are examples of liquor.

A liqueur begins with a base spirit such as brandy or rum, is sweetened with sugar, honey, syrup or beet and often infused with fruits, herbs, spices, flowers, seeds, and even roots and barks for flavor. Liqueurs generally have short aging periods (ie, they’re ready to drink quite quickly), but may have resting periods during their production to allow flavors to blend. Examples of liqueurs are Chambord, Grand Marnier, Amaretto, creme de menthe, triple sec and Frangelico.

Of course, we have to have a slight complication to throw in to the mix. Now-a-days there are many flavored liquors: vanilla vodka, saffron gin, for instance. These are not sweetened and the flavor is generally added by a steeping process after distillation.

OK, now you have all the information you need to confidently distinguish between a liquor or liqueur. So go out and use it.

Pick up some more hints – watch the video.

Posted on September 22, 2011 by Mixnsip
Tagged cocktail how to, liquor or liqueur
Leave a comment