You are here: Home » Articles » I Like Pina Coladas, Any Day 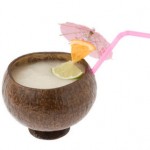 There’s a story (well, maybe it’s even true) that the first pina colada was created in the 1800s by a Puerto Rican pirate, Roberto Cofresí (a.k.a. “El Pirata Cofresí”). He added coconut and pineapple to white rum, supposedly as a morale booster for his crew. (I guess the pirating business wasn’t doing so well).

Of course, there are other claims to inventing the beverage. The most well-known is that it was created at the Caribe Hilton’s Beachcomber Bar in San Juan, Puerto Rico in 1954 as their signature drink. However, another theory states that the pina colada was born by accident when the hotel ran out of coconuts in which to serve their Coco Loco (juice, rum and cream of coconut) and an enterprising bartender used pineapples instead.

Should you happen to go to the Barrachina restaurant in San Juan you will see this sign: “The House where in 1963 the Piña Colada was created by Don Ramon Portas Mingot.”

All of these claims refer to the drink as we know it today, but there’s a 1922 mention of the cocktail in Travel magazine:

But best of all is a piña colada, the juice of a perfectly ripe pineapple—a delicious drink in itself—rapidly shaken up with ice, sugar, lime and Bacardi rum in delicate proportions. What could be more luscious, more mellow and more fragrant?

As you see, this recipe includes no coconut. In fact, pina colada means strained pineapple. So the history is murky but really, when all is said and done,let’s just be grateful to whoever put together the combination as we now know it. And, if you like pina coladas, here’s a list of the best recipes for you to make, whether you’re into yoga or only have half a brain. (Remember the song by Rupert Holmes? It was a one-hit wonder).

1. Pina Colada: The original, with rum, coconut cream and pineapple juice. Yeah, I know you can get mixes and just add the rum to it but this recipe is so simple and simply better. Of course, nothing beats being on a sun-drenched beach sharing a coconut-full with your favorite person but, if that’s not in your future, buy a bag of sand to stick your feet in and drag the tropical hat out of the closet.

3. Nutty Colada: Using gold rum rather than silver and then adding amaretto really works to create a more complex and scrumptiously rich libation. You must try this.

4. Smashers Colada: The smasher part of this colada comes from raspberry liqueur and fresh raspberries. I dunno, but I just might like this better than the strawberry version.

5. Skinny Pina Colada: This recipe is served over ice rather than frozen. But hey! With just 150 calories you still get the flavor and there’s no reason you couldn’t blend the drink if that’s what really lifts your kilt.

6. Pina Colada Mocktail: Let’s not forget there are those among us who don’t imbibe alcohol or, sometimes you just want a tipple. Then enjoy this yummy non-alcoholic adaptation of the potion.