You are here: Home » Articles » What to Drink on St. Patrick’s Day

What to Drink on St. Patrick’s Day 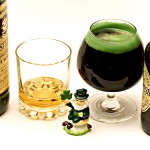 Blue, not green, is the color originally associated with the saint. The Irish Presidential Standard (flag) is “St. Patrick’s Blue” with a golden harp in its center, and the Irish Guards sport a plume of the blue in their bearskins.

The emphasis on green when celebrating the saint’s day is thought to be linked to “the wearing o’ the Green”, a symbol from the 18th century of sympathy with Irish independence. Others believe the green is symbolic of Ireland as the “Emerald Isle”.

Regardless of all that, March 17 is a day of celebration, parades and drinking (particularly green drinks), when almost everyone seems to want to be Irish. So in honor of the folk who bring us corned beef and cabbage, Guinness stout, leprechauns, the Blarney Stone and sometimes a little luck, here are our Top 5 picks for St. Patrick’s Day cocktails.

Black Velvet.  “Guinness is Good For You”, is a slogan that stemmed from people in the 1920s saying that they felt better after drinking the brew. Well, duh!

The Guinness brewery opened at St. Jame’s Gate, Dublin in the mid-1700s, so it doesn’t get much more Irish than that. Add to that an equal amount of champagne and oh yeah! We’re talking velvet.

Emerald.  If a Manhattan is your usual potion then for one day this is the drink for you. Irish whiskey and vermouth with a touch of bitters and not a drop of green. Just simple and classy.

Token Irishman.  If you must drink something green, then do it with a Token Irishman. Irish whiskey and mint bitters; it’s a bit like an Irish mojito – as weird as that sounds.

Bailey’s Pot O’ Mint. For those of you who must have something sweet on St. Paddy’s Day it doesn’t get much better than this – unless that pot o’ mint is newly minted gold at the end of the rainbow.

Irish Coffee.  Come on, you’ve got to have at least one, even if it’s with decaf at the end of the night. Though, frankly, we feel that coffee this way is not a bad way to start your day – at least once a year.

Irish Car Bomb. This is a uniquely American drink. In fact, some people may be offended by it as it’s a reference to the car bombings that were prevalent during the political turmoil in Northern Ireland from the 1960s onward. So drink with respect and in celebration of the Irish ingredients.