You are here: Home » Articles » An Irish Conundrum 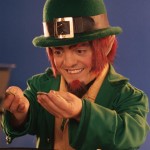 Three Irish guys go into a pub to have a few pints on St Paddy’s day. When they are ready to leave and pay their tab the bartender gives them a bill for exactly $30.00. Each guy gives him a tenner, and they leave.

A little later, the bartender realizes he has made a mistake. The bill was only $25.00, not $30.00. He grabs five $1 bills and rushes after the guys to give them back the money.

On his way out of the pub, the bartender has a thought… these guys did not give him a tip. He figures that since there is no way to split $5.00 evenly three ways anyhow, he will keep two dollars for himself and give them back three dollars.

He taps one of the guys on the shoulder and explains about a mix up in the bill, and hands the guy the three dollars, then departs with his two-dollar tip in his pocket.