You are here: Home » Articles » Make Mine A Margarita

Make Mine A Margarita 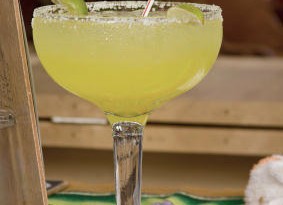 If you don’t already know it, February 22nd is National Margarita Day. Who designated this day as the time to celebrate America’s favorite cocktail? I haven’t a clue and, frankly, I really don’t care. I’m more than willing to go along with any opportunity to indulge in one of my favorite libations.

The origin of the margarita recipe is cloaked in a Mexican serape. The most popular theory is that a restaurateur, Carlos “Danny” Herrera conceived the cocktail back in the late 1930s at his Tijuana establishment for one of his customers, an aspiring actress named Marjorie King, who apparently was allergic to all alcohol except tequila. When and how the orange liqueur ended up in the drink is another mystery.

The earliest claim is that the drink was composed in 1934 for Marguerite Hemery by Willie, a barman from Mexico City who was working at a restaurant, Los Dos Republicas, in Matamoros.

Others give credit for the cocktail’s genesis to Margarita Sames, a wealthy Dallas socialite who claimed she whipped up her namesake drink for friends at her Acapulco vacation home in 1948. Whether that’s true or not, she may well have promoted the drink’s popularity as one of her guests was hotelier, Tommy Hilton, who subsequently added the drink to the bar menu at his hotel chain.

The Sames’ claim loses some credence, however, when you consider the Jose Cuervo factor. According to Anthony Dias Blue, author of The Complete Book of Spirits, the famous tequila was first imported to the US with the advertising slogan, “Margarita: it’s more than a girl’s name.” And that was in 1945, three years before the lady made her assertion.

It wasn’t long before the frozen margarita made an appearance, though its popularity didn’t begin to crescendo until the appearance of the first frozen margarita machine, which was invented in 1971 by Dallas restaurateur, Mariano Martinez.  And it’s a measure of the cocktail’s current iconic status that one of those machines is on display at the Smithsonian’s National Museum of American History. Today, of course, margarita machines are a dime a dozen. Well, not exactly. Expect to pay anything from about $50 for a basic home model to several thousand for commercial ones.

Six years after the appearance of the margarita machine, Jimmy Buffet released his song, Margaritaville and suddenly it seemed that everyone was sipping “that frozen concoction.”

Today, there are endless margarita mixes on the market and making a drink that conjures up visions of sun-soaked tropical beaches, mariachi bands and “all of those tourist covered in oil” is as easy as flicking a switch. If you want to know how to make a slightly more complex margarita, take a look some of our favorites: