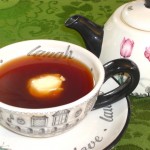 Afternoon tea; that most quintessential of British habits. But in fact, the tradition did not begin until the mid-1800s when Anna, Duchess of Bedford began serving tea with bread and butter and cake to her friends in the late afternoon, to quell the hunger pangs that erupted between the noonday meal and fashionably late dinner at eight or nine o’ clock. Soon, afternoon tea became a social event and the upper-crust of society would meet in the drawing room to consume dainty pastries and cucumber sandwiches (no crust) with pots of tea, while swanning around in the latest fashions and exchanging titillating gossip.

In the counties of Devon and Cornwall, the consumption of afternoon tea achieved even more scrumptious proportions with the introduction of clotted cream, a thick, rich cream that is made by heating unpasteurized milk, then skimming off the layer of cream that forms on its surface.

Today, the typical clotted cream tea consists of rich, buttery scones, smothered in jam (usually strawberry), topped with the cream and served around four or five in the afternoon, which just happens to coincide with happy hour for many of us. Thus, the seeds of the Cream Tea Cocktail were sowed.

The obvious starting point was a good, English tea. We Brits (yes, I am of the English persuasion) generally prefer a strong black tea that also happens to balance the sweetness of the preserves and richness of the cream. For the jam I decided to use, well, jam (a really good, organic variety) and added extra sugariness and complexity in the form of rose hip simple syrup.

The liquor was slightly problematic. There’s an ongoing dispute as to whether the Cornish or Devonshire tea is the best and, indeed, which county is the originator of the afternoon repast. It’s too complex a matter to get into here, however one difference between the two is that in Cornwall the scones are likely to have raisins in them, whereas in Devon they tend to be plain. Soooo, raisins lead to grapes, to cognac, which leads to France…  Hmmm, not so English. Gin, then. OK, I know it originated in Holland but “Dutch Courage” is more often identified with the Brits and frankly, London Dry gin just lends itself better to the libation.

Top that with cream and there you have it – a re-creation of the Devonshire Clotted Cream Tea in cocktail form.