You are here: Home » Cocktails » Tom and Jerry Eggnog 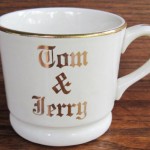 According to David Wondrich, the Tom and Jerry was created in the early 1850s by “Professor” Jerry Thomas while at the Planters’ House hotel, St. Louis. For the next century it became a holiday staple. Nowadays, you rarely see the drink.

This eggnog requires some effort but it’s worth it. And you can still find the traditional Tom and Jerry mugs, like the one pictured, at flea markets or on ebay.

Separate the eggs.
Beat the whites until they form a stiff froth
Beat the egg yolks and sugar “until they are as thin as water,” as the professor advises
Gradually add 4 ounces brandy to yolk mixture
Add allspice, cinnamon and cloves
Fold the whites into the yolks.
When ready to serve, give it another stir and then put 1 tablespoon of this batter in a small mug or tumbler.
Add 1 ounce brandy and 1 ounce rum, stirring constantly to avoid curdling.

Fill to the top with hot milk and stir until you get foam.