You are here: Home » Articles » Does a Noggin of Egg in Your Nog Make an Eggnog?

Does a Noggin of Egg in Your Nog Make an Eggnog? 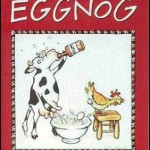 Alright, I’m no Dr. Seuss but the origin of eggnog is as convoluted as any of his sayings. (By the way, the good Dr. was the son and grandson of brewmasters in Springfield, Massachusetts. One wonders what remarkable potions he might have concocted had he gone into the family trade).

So here’s a quick trivia question. The word noggin refers to

If you answered “c” you obviously have a brainless noggin. However, for our purposes we’re only interested in the fact that a noggin was a shot of liquor. It also referred to the small cup or mug that would have held that liquor.

How does this get us to eggnog, you ask? Frankly, I don’t eggs-actly know. Neither does anyone else it seems. There is research that suggests a mix of egg and beer was consumed during the early middle ages when the egg was considered a symbol of life everlasting with promises of divine reward. And according to Philippa Patrick, of the Institute of Archaeology, at University College, London, 13th century monks consumed a posset of egg, milk and figs. (A posset is a hot drink made of milk curdled with ale or wine and often spiced.)

On to the 1800s and eggnog had become something more akin to the drink we’re familiar with today, with ale being replace by brandy, rum or Madeira and, in the American south, bourbon.

As to the origin of the name, there’s an egg-straordinary number of suppositions but no definitive explanation. Certainly, it could be a derivation of noggin. Also, in olde English, the word nog was slang for ale. Some think it’s a play on the word, grog, the term for rum in colonial America. Hence, “egg and grogg”… “egg ‘n’ grog”…”eggnog”.  Hmmmm. How about a shortened version of “egg and grog in a noggin”?

When all’s said and done, do you really care? The thing that matters is that eggnog as we know it today is an egg-sceptionally delicious part of the Christmas holiday tradition. And there’s nothing quite like your own homemade brew.