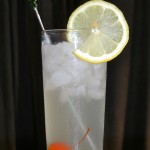 Some say this elegant drink began as the John Collins, named for a waiter at Limmer’s Old House in London. Eventually, someone made the cocktail with Old Tom Gin and hence, it became the Tom Collins. This theory is made more likely by the Great Tom Collins hoax of 1874, when people joked about a non-existent Tom Collins.
Poor John, by the way, still ended up with a namesake cocktail, only mixed with bourbon.
Here’s the video.
[five-star-rating]

Combine gin, lemon and sugar in a collins glass that is 3/4 full of cracked ice

Stir, then fill with club soda