You are here: Home » Articles » Teapots, Crackpots and Cocktails 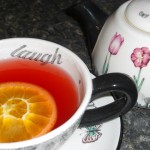 There’s a move afoot in some of the more swell establishments in Britain and places like The World Bar in Australia and New Zealand. It’s “Teapot Cocktails”, which simply means that beverages are being mixed in and served from teapots, usually for two, and brought to you a la “tea for two” on a serving tray with cups and saucers.

As a Brit, a cocktail lover and a tea drinker I consider this to be a downright noble use of the lowly little pot. As an unskilled but enthusiastic mixer of beverages I love the idea of using everyday things to create a fun, crackpot cocktail experience.

Ironically, it seems to have been the Americans who first popularized this tradition. As 5 o’ clock tea time morphed into cocktail time at the turn of the century, teapot-like shakers were used to mix drinks. A couple of decades later it seems that the “teapot” may have been used for more subversive reasons.

The Prohibition Act of 1920 banned the production, sale and serving of booze. Rather than retarding the consumption of liquor this led to a more creative cocktail culture where, instead of just swilling back home-made moonshine, the liquor-loving citizenry devised concoctions that were not so easily recognizable as alcoholic and served them in teapots. Things like the Bacardi Cocktail and the Sidecar, or the French 75. (According to David Wondrich, probably the only cocktail invented in the United States during Prohibition to become a classic).

And how perfect is it to use your teapot for its more traditional purpose — tea, but with an alcoholic twist. There are a number of tea-infused liqueurs on the market. You might try mixing a Zen Moment with one part green tea liqueur, three parts chardonnay and a little squeeze of lemon. Or brew a Cranberry Orange Tea with 1 part Cointreau to eight parts cranberry herb tea. You might match your teapot to your drink — Serve a Rose Cocktail in English rose porcelain. Better yet, invent your own cocktail then post it on mixnsip.com for all of us to enjoy.

So now’s the time to resurrect the old tea set from the back of the kitchen cupboard or start scouring local flea markets and yard sales for inspiring finds.