You are here: Home » Articles » So Just Who Was Tom Collins?

So Just Who Was Tom Collins? 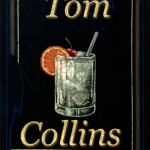 The simple answer: he never existed. The Great Tom Collins hoax of 1874 had nineteenth-century jokesters telling friends that “Tom Collins” had been talking about them. When the friends denied knowing anyone of that name, the wiseguys would make up all kinds of outrageous things that the mythical man had been saying about their friends, the idea being to whip said friends into apoplectic frenzy. Apparently, folk were easily amused in those days.

Anyway, soon after, Jerry Thomas (known as the Father of American Mixology), memorialized the Tom Collins cocktail in his 1876 version of “The Bartender’s Guide”:

Jerry Thomas’ Tom Collins Gin (1876)
(Use large bar-glass.)
Take 5 or 6 dashes of gum syrup.
Juice of a small lemon.
1 large wine-glass of gin.
2 or 3 lumps of ice;
Shake up well and strain into a large bar-glass. Fill up the glass with plain soda water and drink while it is lively.

Not everyone agreed that the Tom Collins cocktail originated with Jerry Thomas. There were those in Britain who claimed that an English man was its creator. But at Mix ‘n Sip we say, “Who cares?” And we’ll raise our glasses to every bartender and every cocktail enthusiast who enjoys their gin presented this way.

One Response to So Just Who Was Tom Collins?