You are here: Home » Cocktails » Lime Rickey for a crowd 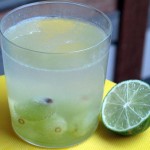 Lime Rickey for a crowd

The “Rickey” cocktail was originally a mix of bourbon, lemon and soda and was named for Joe Rickey back in the late 1800s. Today, almost anything with lime and some sort of soda can be called a Rickey, so get creative and invent your own cocktail.

Stir all ingredients in an ice-filled pitcher.