You are here: Home » Cocktails » Bacardi Cocktail – The Real Thing 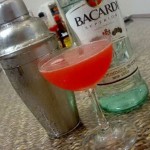 The Bacardi Cocktail is the only recipe in the world that’s protected by law. In the 1930s it was discovered that at New York’s Barbizon-Plaza Hotel the drink was being mixed with a lesser rum. The hotel was brought to trial in 1936 and the courts ruled that a Bacardi Cocktail MUST be made with Bacardi rum.